Being outdoors with your baby, might be just a little bit magical!

It’s funny, isn’t it, how mesmerising watching the clouds go by can be, or how captivating it is lying under a tree in the dappled sun watching the wind move the leaves. As you do these simple things, you find yourself calming down, slowing down, breathing differently, breathing deeper.

Nature is actually quite magical!

But, research is showing that we aren’t spending time enjoying being in it.

In 2012, the National Trust did a survey that showed that children were half as likely to play outdoors than their parents had as children, and in 2015, the RSPB published a report warning that only 1 in 5 young people reported a connection with nature. People in maximum security prisons are spending more time outside than children are with one in 10 never spending any time outside, according to a Persil advert. The majority of children https://www.youtube.com/watch?v=8Q2WnCkBTw0

As one man in the Persil advert ‘free the children’ says, ‘if you don’t need to throw the kids in the bath at the end of the day, they haven’t played hard enough!’

So, what is it that is so good about children being outdoors and playing and learning in nature?

Being outside helps promote physical activity for your baby and obviously this is great for their health, but it’s also been linked to better outcomes at school (when the time comes). Outdoor play, particularly play that uses nature at the centre of it, develops a child’s motor skills, core strength and their sensory systems which form the foundation for a range of their other skills.

Think about play that enables your baby to explore the world around them, starting from lying on a mat under a tree watching the leaves move in the wind, to walking along a fallen log as a toddler.

Nature stimulates curiosity. Think about a toddler watching a bee collecting pollen. When he was little, my middle child sat and watched a bee as it went about its work. I heard him say, ‘fluffy bee’, as he stroked it… then of course the tears came when he was inevitably stung! But his curiosity, focus, concentration, investigation skills, etc were all spiked before the unfortunate stroking happened!

When children are playing in nature, the environment is constantly changing. A mud kitchen on a dry day in the summer is a very different place to a mud kitchen in November in the rain! This enables your baby or toddler to investigate, explore, ask questions, push new boundaries, assess the risks, get creative, and test their own limits. 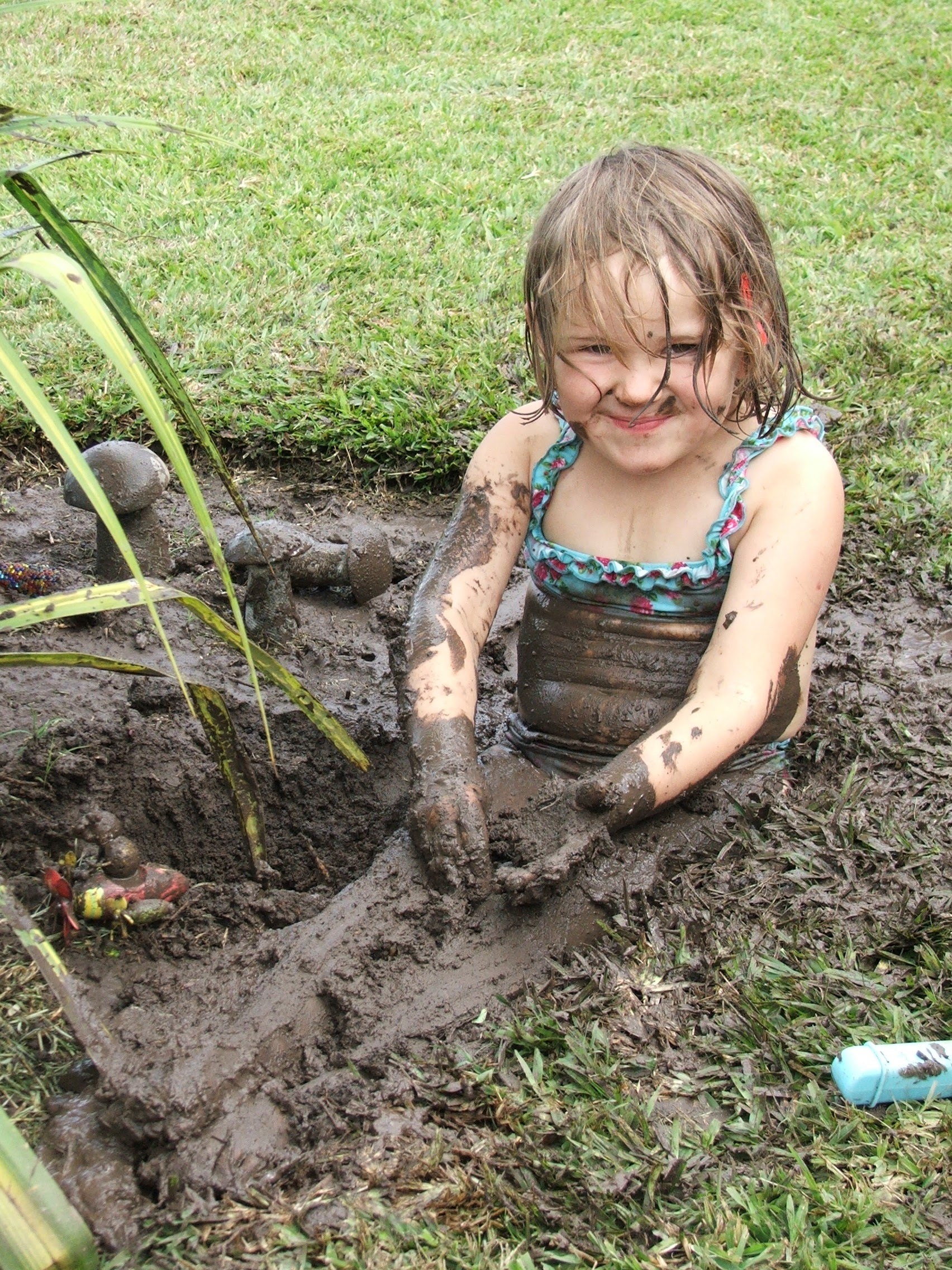 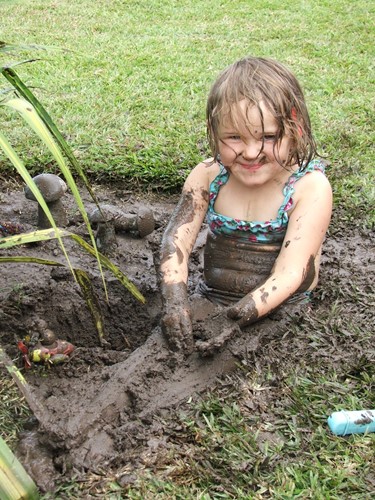 (My youngest has just come back from playing on his bike with his friend, they found a series of jumps that had been created in the woods. They were full of it and came to tell me all about their adventure. Apparently, there were two runs, and they chose the less steep of the two, because “we didn’t want to kill ourselves!”, but they were happy with the adventure they’d had. Who knows, as they explore it more over the summer, they may end up trying the second route, but they will know when the time is right for that).

Play in natural spaces has been found to stimulate curiosity and creativity. When children are playing in nature, they play for longer and are more focused and more engaged than when they play in artificial environments. This is because the play encourages their creativity as they get to create the game, it’s not being presented to them. When children have ‘toys’ that require them to invent the game, they find it more engaging, it excites their curiosity and keeps them engaged for longer as the game can be flexible, changing as the child’s focus changes. They investigate more, they question more, they persist longer. Think here about a one-year-old with a wheelbarrow full of water and some pouring things, sticks, leaves, and flowers. Just watch to see what happens, ask the odd question, engage with them and ask them what they are doing and why, and you will see that your baby is completely absorbed by the activities that they are doing. The game may change, morph, or develop, but they are learning, focused, and absorbed by it and developing their curiosity and creativity as they play.

Research shows that nature is brilliant for our mental health and wellbeing. We all know that just drinking in those calm green spaces really does give us a boost, and it’s the same for your baby or toddler too… take a cranky baby outside for a walk and you have a calm baby in moments. Show a fractious toddler a puddle and let them explore it, and you will have them busy for hours. Nature is magical, as I say! It’s also been shown to improve our mood… how many times have we come back from a walk and just felt better? Well, it’s the same for our children! So, it may not be the centre of the countryside, but just getting out in nature and spending time in say, a park, or a green space of some sort can make all the difference.

We all know we need to do more to save our planet. Bringing our children up to enjoy nature’s toys can only be a benefit to everyone. Children are happy with whatever toys we provide for them, so rather than providing lots of plastic toys to be used inside, why not make use of the ‘toys’ that nature provides? It will help your child develop a love for nature, a caring attitude towards it and an imagination to develop games wherever they are.

In Scandinavia, for years, children have spent all year ‘round outside in their nursery schools, whatever the weather. I’m not sure who said this, ‘there’s no such thing as bad weather, only bad clothing’, and that’s so true for our children and getting them to play outside.

Outside, behaviour which is trying inside becomes acceptable - a boisterous toddler can run and jump outside without being told off, they can swing and play and investigate. It’s a space to say ‘yes’ rather than have repeated ‘no’s. It can be a reset space. Finding a safe place for your baby or toddler to explore and be in nature will help both of you. 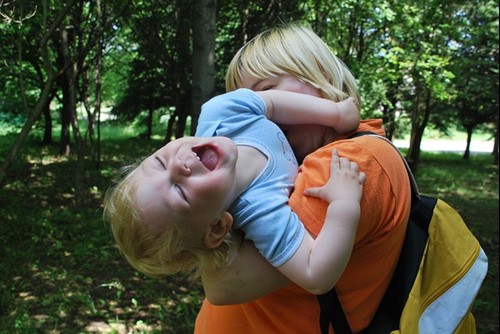 So, why keep the play inside this summer, when you could take it outside at every opportunity?  Your baby can just as easily do tummy time on a mat in the garden, learn to crawl in the grass, explore the flowerbeds and investigate the pebbles as they can play inside. Bring the chalk outside and let your toddler draw on the path or give them a brush and some water and tell them to paint big. Fill the watering can with water and let them water what they want. Put some pegs on a bucket and let them practice pegging them on the edge of the bucket. Let them sit in a tub of water and wash their dollies outside. You can even put your baby to sleep for their naps outside; they will sleep better and longer so long as you have the right amount of covers on them and they aren’t in the direct sunlight. If you want more ideas like this, the Oliiki app has this covered for all ages from conception to two.  http://ow.ly/BlJv50zxBum

Make it your challenge this summer to spend as much time as possible outside. Throw open the doors to the garden if you have one and use the outside space as part of your house. Make sure your baby has the right clothing on, and then run a bath in the evening because you will need to throw the kids in the bathtub because they WILL have been spending enough time outside!